Not every editor is right for every project.

I'm working on a project with some people.

It's a comic book. My job is to write the comic script for issue #1.

I'm just writing what the lead tells me to. I do have some creative freedom, though. I completed about 90 or so panels and the lead had someone take a look at it. I'll call this person Sheila.

But I'll get to that in a minute

The basic premise is that 2 cousins in their early 20s are kicked out of their homes, they move in with a woman who took care of them when they were children. They discover she's an alien and she teleports them to her house on another planet.

So. Pretty basic. My job is to set up the characters.

It was obvious Sheila didn't understand the purpose of a comic script.

If you are unfamiliar with it, read this short paragraph where I'll explain it. If you do know what it is, skip this paragraph. The comic script is used by the artist; the writer writes the dialogue and explains the art they imagine accompanies the dialogue and other story elements. That's it. The script is for the artist. Generally speaking, a reader will not be reading the script.

My first clue that this critique wasn't going to be great, this was at the top of the page. Show don't tell. What? That is not applicable here.

Take a look at the following example:

So the premise here is that Lexis's dad kicked her out of her house and left her stuff on the curb. She ran out of work to grab it to make sure it wasn't stolen. Jamison is the boss. Ike is Lexis's cousin and they work in the same comic shop together.

Jamison: I don't pay her to run errands

Ike: She's off the clock.

Jamison: I don't pay her to be off the clock

Ike: (...) [this indicates to the artist to draw Ike as speechless and confused with "..." in a speech bubble.]

Ike: You're not wrong [this next line of Ike's dialogue indicates to the artist to put this text in its own speech bubble]

Below, Sheila completely removed panel 14 and 15. They served a purpose. Ike feels strange and he feels like there's something different in the air. It sets up the craziness that happens later in issue #1 but it also sets up something they discover later on. Sheila doesn't question this and she doesn't offer an alternative or provide comments justifying her reasoning for this deletion.

The following changes completely alters the conversation. Lexis's response sounds like Ike is always talking about sex dreams. But that's not the case, this is the first time he mentions a sex dream because it was out of the ordinary. And Lexis's original response is reflective of the horror people feel when they associate their family members with sex in any way. It also serves to add to her character.

There are 174 changes and I disagree with every single one of them. I'm not saying this doesn't need to be edited but it needs to be edited by someone who understands the project.

And I really had to turn inward with this marked-up document and ask myself some questions; Was I bad at accepting criticisms? Is she seeing something I'm not? Am I one of "THOSE" people that thinks everything I write is genius and can't be told otherwise.

I came to a conclusion.

Sheila was not the right editor for this project.

She didn't understand the medium and she didn't take the time to learn. She rubbed herself all over it and removed months of work in writer's chats, character building, and world building.

It was a lesson to me and got me really thinking about how I approach editing my clients projects. To make sure I understand their project and help them build their vision, not rub my stank all over it and erase their voice. A good editor is going to bring your voice out, amplify it, and spit shine it. But it's still all you.

When you work with an editor, you two have to jive, you have to sync up. When you see the comments, edits, and suggestions it may sting at first but you should be able to see how you can build your work up and make it super duper awesome. You shouldn't hate everything and feel like what you wrote was butchered. If you do, you either need to communicate your concerns or find someone else.

We will definitely be going to someone else for further critique and rejecting every single change.

Beta Readers Are Essential in your Editing Journey

Beta Readers Are Essential in your Editing Journey

Darlingcide: Where do our Darlings Go When We Kill Them?

Books I'll Be Rereading for the Rest of My Life

The Three Types of Editing 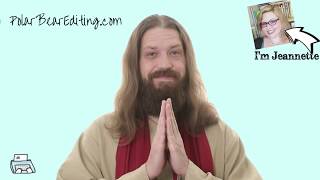